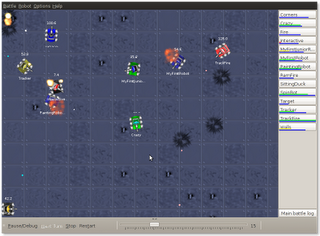 Robocode uses Java as the programming language, and robots are shared by packaging them into Jar files. This means we should, with very little effort, be able to use Clojure to write a robot. Start by downloading the latest version of Robocode, available here.

The first fly in the ointment is that Robocode restricts the use of third-party JARs. If you try to just add clojure.jar to the class path you'll get an error message like this:

To fix this, edit the start up script (robocode.bat or robocode.sh depending on whether you are running Windows or not) and make sure you disable the security manager by adding -DNOSECURITY=true to the startup line. This disables the security manager meaning that there are no restrictions on what the robot can do. The security manager is in place in case you are a sentient robot killing machine. Be warned.

Without further ado, here's the most basic robot imaginable, borrowed entirely from My First Robot and converted over to Clojure. This robot moves back and forth, turns the gun around and fires at anything that looks at him slightly funny.

It's not exactly the most exciting robot in the world and even loses against a robot that sits still and turns the turret around! How can we make it a little bit cleverer?

The robot below extends from AdvancedRobot which allows non-blocking calls, writing to the file system and custom events.

This shows two bits of the :gen-class directive I haven't used before. :init allows you to specify a constructor routine. The return value for this function is unusual in that it is always a vector with two elements. The first represents any arguments to the superclass (in this case empty) and the second represents any state that the object needs. The :state keyword allows you to name the method of accessing the state.

The constructor function simply returns a reference to the state which is initially empty. We also define a structure representing a sighting of the enemy. These sightings will be logged in our state and will be used to determine the strategy.

onScannedRobot now records the details of the last observation (dosync sets up the transaction, alter applies the function given (conj) with the given arguments.

walk simply makes the robot run around the outside of the arena. This is heavily based on the example code here. attack just waits for a stationary robot, turns and fires!

This at least allows me to beat the Fire default robot 10-0 (most of the time!).

There are a load more strategies and patterns available on the Robocode Wiki.

This was quite a useful learning exercise because I found out about init and state. One problem I ran into was that init doesn't allow you to call methods on the object that is about to be constructed. This was fixed recently, and now there is a corresponding post-init hook.

You can find all the code on GitHub.
Email ThisBlogThis!Share to TwitterShare to FacebookShare to Pinterest