The Game of Life in Clojure. 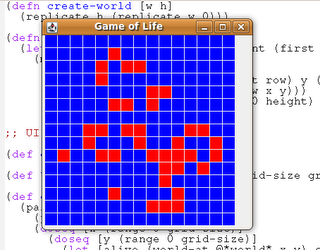 Conway's Game of Life is by far the most famous example of cellular automaton. It's not really a game, you set an initial state and then watch it evolve.

The "game" is played on a grid with each cell having two states (alive or dead). The next state can be computed from the previous one using the following rules:

The first thing we need to do is determine a representation for a grid. I've gone for a simple approach of representing a grid as a list of lists. create-world creates a blank grid

Now we need some helper functions for getting the state of an individual element and toggling values.

toggle-row-at and toggle-pos both feel wrong to me - I'm not sure of a better way to carry position information into a map function (for example, I want to perform a map operation with positional information - zip is the only way I can see of doing that - wonder if there is a better way?).

Armed with functions to explore the world we need to write the logic to transition from one-state to the next.

new-state encodes the rules, and neighbour-count just does exactly what it says on the tin. Now all we need to do is apply new-state to each cell in the grid and produce the next one. This is suprisingly simple:

It again makes use of the zipmap idiom for applying mapping function with positional information. I wish I could find a reference which states whether this is a good thing or a bad thing :)

In order to implement the GUI around this, we define *world* as an atom, and provide a mouse listener which on a left-click toggles elements, and on a right-click moves forward one step. Animating it would be fairly simple too (just hook up a Swing timer a la bubble sort).

Full code is availabe on my Git Repository
Email ThisBlogThis!Share to TwitterShare to FacebookShare to Pinterest