Google Wave is an attempt to reinvent communication and collaboration on the web. Or, it's just a web site where you can share information, with a documented protocol and an API for extensions. Google wave consists of three pieces:

A wave is a conversation which may include both human and computer participants. The wave stores state and maintains historical information. Participants can modify the wave in real-time. A wave contains one of more wavelets.

A blip is the basic unit of conversation and consists of a single message (or interaction event) that appears on a wavelet. Blips can be stored as a draft before being published. Each wavelet always consists of at least one root blip. Finally, a document represents the actual content of a blip. This is in XML format which can be retrieved, modified or added to by the API. Documents are typically managed through an API rather than direct XML manipulation.

You can interact with the Wave API by extension or integration.

One of the ways to extend Google Wave is via a Robot. A Robot is an automated participant on a wave. A robot has exactly the same rights as any other participant in a wave. For example, a robot can modify information in a wave, talk with other participants and communicate details to the outside world. A robot communicates using the Wave Robot HTTP protocol (which is currently undocumented). For now, the only way in which a robot can be created is to build one using the Google App Engine. Now that GAE supports Java we've already seen how easy it is to write a Google App using Clojure, so it should be pretty simple to write a basic Wave Robot in Clojure.

The first step is to create and register with Google App Engine (see http://appengine.google.com). A Google Wave robot is basically exactly the same as a GAE application. A robot is represented as a standard servlet. The directory structure used is almost exactly the same as that described here.

As it involves Java, there's a pretty heavy amount of XML involved. We'll pretend that doesn't exist for the moment and look at the basic implementation of a robot.

This is the "parrot" example from the Google Wave Robots Java Tutorial. It monitors events and when participants join or leave utters a really exciting greeting. processEvents is the event loop for robots. In this case we just filter out the interesting events (me joining a conversation, or people joining a conversation I'm in) and spout out some gibberish.

Back to the XML files. The tutorial explains them better than I can, but in short:

Examples of all these files and the directory structure is available here. Using this and the SDK to deploy you can get your robot up and running in the Google wave sand box. 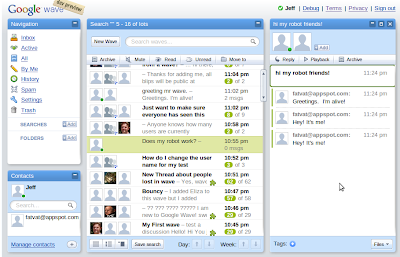 So do I think Google Wave is going to change the way we communicate? It's (obviously) too early to tell. If it becomes integrated within standard email clients, allows me to mix mediums (e.g. Twitter, Facebook, email, IM, voice mail) and so on, then it has the potential to unseat email. There's some big questions too. How will robots be regulated? How will you stop spam becoming a nightmare? (you should see Eliza dishing out advice!). Exciting times ahead though!
Email ThisBlogThis!Share to TwitterShare to FacebookShare to Pinterest
Newer Post Older Post Home